It took me 3 hours to do my homework before I went out yesterday. My mother in law who is my marker said I’d got the grammar correto (correct) thoughtfully adding  ‘português é muito difícil’ so hopefully I am making progress. Just to make sure, our apartment is littered with yellow sticky notes so I can remember for example that when I wash my hands in the lavatória it is the wash basin and not the sanita (toilet)!

It’s a week since I traded the autumn and drizzle of Lewes for the late summer warmth and sun that is Lisboa in October. What’s happened?

For a start Portuguese Finance Minister Vitor Gaspar upset many here with new austerity measures that will impact most on those with high (relatively speaking) household incomes of €150k+. Delivered in a monotone voice with the demeanor of an undertaker with a bad toothache he just about got away with it as he is seen to be doing what’s in the best interests of the country.  That there will be a backlash in the form of more strikes is not in doubt and already business leaders are urging tougher action on reducing state expenditure. What was of more importance; the global financial market response was positive and Portugal managed to rollover some bonds at less than the penal rates it attracted before, a precursor to reestablishing credibility when serious borrowing is required in a few years time. The outlook is far from certain as I write this with unemployment predicted to be 16.4% in 2013.

The train drivers (who I am told are well paid) have taken umbrage at austerity so all rush hour trains from Cascais to Cais do Sodre (Lisbon Terminal) via our stop at Algés were cancelled for three mornings.  There are frequent ticket checks on trains, trams, buses and the metro to prevent fare dodging though I’ve been impressed by the civility and patience of the inspectors when dealing with estrangeiros (foreigners, mostly Americans) who are unaware of the need to swipe the ticket before boarding.

The daily commute to classes has been instructive requiring ingenuity and adaptability.  On two days there have been accidents that impacted tram route 15. On both occasions almost miraculously a bus appeared (with number 15 on it) and became the tram so it could avoid the incident and get us to work on time. All conducted with a minimum of fuss and good humour completely at odds with the common perception of life here.

me at the estádio da luz (Stadium of light) home of Benfica for the UEFA champions league fixture with Barcelona; surely one of the great matches. A fuller report with pictures is available here: (Benfica-vs-Barca: an englishman’s perspective). Suffice to note that it was an extraordinary evening from start to finish. Take a close look at the picture and the skyscraper behind to see how high up the spectators are!

Thursday night the language school organized dinner at a casas de fado (fado house). I met ‘my’ classmates in one of the main squares, as I was worried about some of the younger girls wandering around on their own in the Bairro Alta area of the city that can be a bit bohemian and in your face. More by luck than good judgment I got our party there in good time unlike the main party that arrived 1 hour later. The downside: we had to down copious quantities of Superbock (local beer) without food. The upside: Alexander the shy German from a town with an unpronounceable name was sufficiently inebriated that he was moved (at my prompting) to join in with the singing, displaying an astonishing talent that surprised everyone. And I shall forever treasure the look of incomprehension on the face of our empregado (waiter) when one of our party asked for fish with no bones!

It was fortunate then that we had a public holiday on Friday (Republic Day) so no classes. People went off to see relatives: I went for a coffee with one of my fellow classmates and then walked back along the seafront ending up at the most visually stunning modern architectural masterpiece just as the sun was going down. The buildings were constructed using donations made by the foundation established by one of Portugal’s richest families and form a research centre that attracts the world’s best ophthalmologists.

One of the buildings has a restaurant with a view that is unsurpassed while the centerpiece comprises two columns surrounded by an infinity water feature that face due west towards the US. iTranslate (a wonderful little iPhone app) has come in very handy for those moments when my feeble attempts at conversing with my mother in law in her native language have come to a dramatic halt. Now she has mastered the art of speaking into the iPhone so the app can understand her voice we’ve got over the periods of interminable silence that were a feature of our meals on the first couple of days.  Last night was an amusing example: having told her about meus pais (my parents) I asked about her father and mother (pai & mãe) and what they were called.  Like many words (especially names) there is no effective translation witness the outcome: ‘woody roach’, hardly an endearing term with which to address anyone.

Sabado (Saturday) after homework I went to Lisbon’s Fado Museum. It is a must see if like me you are drawn to the haunting melodies that characterize this special form of indigenous Portuguese music that dates back to the early 19th century and was originally sung by the lower classes as a way of telling stories about their lives.  A few bits of trivia: in 2011 Unesco classified Fado as ‘Intangible Cultural Heritage of Humanity’ whatever that means; Fado is typically performed with a singer and two guitarists one playing the Spanish guitar, the other the Portuguese guitar (see below); and Mariza (probably the most popular Fadista – fado singer – today) has toured the world selling out in each location – I’ve been to two concerts and cannot speak too highly of her. 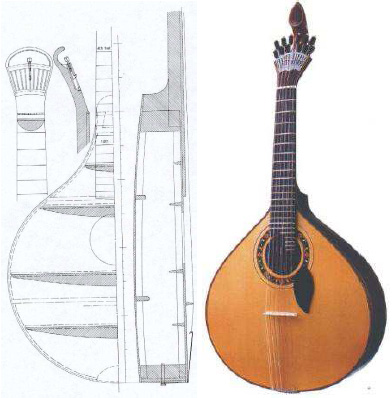 It being Domingo (Sunday) today like many I went to the Praia (beach) at Estoril just a 20-minute train ride away along the coast.  Out of the station and onto the beach it was lovely to be bathing in clear water in October (even if it was a tad cold – frio).