Today Chris Collison handed over the first iteration of the manuscript to Facet Publishing. The countdown begins to the May publication date.

The past 3 months have been hectic as Chris Collison, Patricia Eng and I raced to meet a publisher deadline of 31st January. I’ve enjoyed the discipline of conducting interviews and turning them into chapters that showcase their KM activities.

I’ve also enjoyed working virtually as a team even though bandwidth in Chile and at some airports can be a challenge (Patricia is touring South America and Chris spends more time on planes than I do).

It all begun over dinner as most good things do. Having run a joint Masterclass in Lisbon in May 2017 Chris Collison and I were sitting in a restaurant overlooking the River Tejo supping a wonderful Alentejo Red wine enjoying Arroz do Marisco (Portuguese Paella).

Over the next 6 months we had a number of discussions culminating in a decision to go ahead and write a book using the release of the ISO KM Standards as a backdrop.

A book that makes no promise to help the reader ‘pass’ an assessment, more one that draws on great examples from leading global organisations and highlights aspects from their KM Programmes others might find inspirational.

I’ve learned so much during this time and could not have wished for a more varied group of organisations to interview:

There have been so many interesting stories and reassuringly endorsement of the importance of the “8 ‘ates (soft skills essential for KIM’ers) I’ve spoken about and led masterclasses on. It’s also been interesting to learn that one organisation has aligned it’s own KM consultancy effort to the new ISO 30401 KM standard.

The KM Cookbook serves up a menu of success stories and strategies for organizations wanting to know more about Knowledge Management Standard ISO30401 – whether they intend to pursue certification, or simply seek to use it  as a framework to review their existing programme and strategy.

Knowledge Management (KM) has been around for over 20 years as a set of tools and methods for connecting, collecting and creating knowledge. Lots has been written, and there are tens of thousands of practitioners out there—in-company  specialists and consultants.  Unlike Lean, Agile and other business improvement methodologies, KM has never had a single agreed set of tools, or a commercial accreditation or standard.  Attending a KM conference can feel a bit like visiting an international street food market!

In many ways, the arrival of an internationally agreed standard and vocabulary, imbues fresh professional credibility and to the field of Knowledge Management. It provides knowledge managers with a ‘brand-new kitchen’, and a moment during which they can pause for a moment and consider the service that they provide to their organisations.

Why a Cookbook?
For a potential restauranteur who has gone beyond casual street-food and is looking to sell a service to customers, the challenge – and the opportunity – is to provide a distinctive offering with consistency and professionalism.  To do that successfully requires a number of elements:  credible reputation, premises, staff, tasty and appealing menus and recipes, compliance with relevant food hygiene standards, and, of course, blood, sweat and tears.  And at the heart of it all, with its appliances, utensils and food stocks, is the restaurant kitchen. 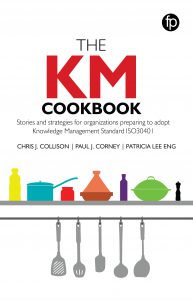 ook, we use the metaphor of the restaurant, its cuisine, owner, chef, staff, ingredients, menu-planners, customers – and a restaurant critic to serve up ISO30401 on a plate for the readers. The second half of the book explores sixteen different examples of KM in practice, through the words of their ‘KM chefs’.

Imagine you had the opportunity, not just to enjoy a new, well-equipped and fully inspected kitchen – but also the chance to sit down with KM ‘chefs’ from around the world, across different industry sectors and listen to their stories. That’s exactly what we have set out to do with the KM Cookbook.

Who we’ve written it for

Our aim has been to produce a highly readable, slightly tongue-in-cheek dinner companion for a wide readership. We hope anyone looking to see how Knowledge Management can make a difference to their business will enjoy this as a good read and that KIM Professionals, Senior Management, Quality Management and Human Resource Professionals will find much of specific interest to them.

Agreeing a framework and table of contents took time; we narrowed down the immediate target audience to:

Draw up a chair –  we hope you’re hungry!

For the past couple of years, national standards committees have been working on the development of an ISO Standard for Knowledge Management Systems. Is this a big deal? How have we got here? Will it have an impact? Who is likely to benefit? What does it cover?

We would like to stress from the start that the new ISO BSI Knowledge Management Systems Standard is a standard of principles. We believe, contrary to some in the Knowledge & Information Management (KIM) community, that there is real value in having a set of universally-agreed principles that practitioners can align with.

The new standard sets down a marker for future knowledge managers to benchmark activities against. As with all BSI standards, it will be reviewed every five years to ensure that it is up to date.

The idea of KM Standards is not new; the British Standards Institution (BSI) first discussed it in 2000.

A long time in the making

In 2002, BSI’s KMS/1 Committee produced “BSI Position Statement on Standardization within Knowledge Management” which concluded: “The judgement of BSI is that, at this point in the development of Knowledge Management, it is too early to attempt to impose too rigid a framework or too narrow a view of this rapidly developing field.”

Interestingly it presented this figure to illustrate the above conclusion.

BSI noted: “…within British Standards there are effectively three levels of standardization that can be applied according to the requirements of the industry at that specific point in time.

As an area grows in maturity it is generally the case that the documents produced will tend to move up the pyramid, reflecting the greater consensus within the industry and public. It is important to note that, unless directly referenced in legislation all Standards (and other documents mentioned here) are voluntary documents.”

So what has changed? Why is the time right for a standard?

Despite frequent predictions of its demise, the discipline of KM (or whatever guise it appears in) is now a tactical/operational role in many organisations. Take a glance at the countless adverts for knowledge managers to see what we mean.

KM has grown in maturity, and can now be considered to be almost a quarter of a century old, so meets the criteria BSI applied for having a standard.

Today we await formal publication of ISO KM Systems Standard 30401, individually approved by the national standards committees and the ISO Working Group that oversaw its development. Indeed it may well have “hit the stands” by the time you read this.

What we can confidently predict is that on 8 October there will be a formal launch event organised by BSI details of which will be available soon.

Development of the standard

Work started in 2015 and was conducted by an ISO steering committee supported by eight national mirror committees including the UK, which contributed significantly to the initial draft.

A draft was made available for public review for a six-week period during December 2017 and January 2018. Hundreds of comments were received and the UK BSI committee went through each one (including those of CILIP’s K&IM SIG), identifying 270 suggestions to be referred back to the ISO committee. These were combined with comments from 15 constituent countries, including eight national mirror bodies. This means that the final standard not only reflects UK contributions but those of other countries.

About the new standard

The new KM Standard will not try to tell you how to do KM, but it does help you ensure you have set up a good management system, providing a solid foundation on which to build your KM solution.

The standard is flexible. It is applicable to large and small organisations. It sets out principles for guidance. This standard does not mandate how you implement KM. It describes requirements for the final product but not how you get there. It’s an attempt to ensure that KM is managed with a degree of consistency. It is an aid for self-audit.

What does the standard cover?

Benefits of the standard

In order to assess the impact it is worth providing context. Many KM programs benefit from an image. Here’s one that might help: 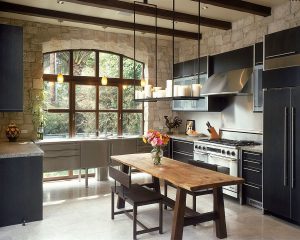 The standard is like a new kitchen without the utensils, the crockery, cookbook; it’s down to those who use it to determine how it will work for them.

At first, practitioners are unlikely to see a significant change. Few assessors have seen the standard, even fewer will have a KM background, though it’s arguable whether that is a prerequisite to undertake a “compliance audit”.

Our hope is that it provides a globally-accepted framework of what should be in a KM programme and how it should be supported and assessed. We are looking forward to it being drawn on by organisations that value KM.

At the time of general release of the draft for comment in Q4 17, a question that arose was: “Who is going to benefit?”

Undoubtedly consultants will develop offerings that purport to help organisations to prepare for an ISO KM Standards Audit. If that helps to raise standards then surely that’s a positive. However, we see the real beneficiary being KM practitioners, current and future in those organisations such as the public sector for which ISO Standards are a core component of their quality measurements.

A week or so ago Chris Collison published this on LinkedIn:

Excellent article in CILIP magazine by Paul Corney and Karen McFarlane CMG describing the forthcoming KM Standard. Despite one or two early reservations (and a lot of commenting) – I’m convinced that – used thoughtfully and strategically – it will become an exciting force for good. Hungry for more? Watch this space for news of an exciting collaboration! 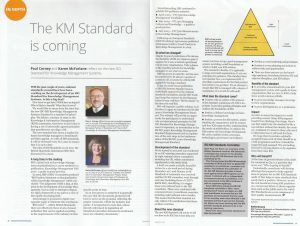 In the intervening period the post has been viewed by more than 4k people and liked by 100+. It also spawned a number of comments from those in the KM Community who oppose the idea of standards for KM.
While everyone is entitled to their opinion and I’ve expressed mine in the article I was very disappointed that once again the integrity of those who took part in the process was called into question. I participated because I believed it was the right thing to do not because I thought it would generate future business.  Anyone who knows me and the pro bono / community work I’ve done and will continue to do will confirm that is not how I am wired!
Subscribe