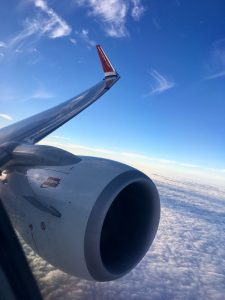 I’m in Stockholm. It’s crisp and bright in stark contrast to the current political uncertainty. It’s 15 years since I was last here, my first journey on Norwegian (I was impressed) and I am struck by how much technology and green issues permeate society.

My hotel is cashless and everywhere there are adverts reminding you of the technological advances born in this country.
Exiting the Central Railway station I see signs reminiscent of airports in the Middle East and other train stations in Europe as groups of young Arab men greet friends and family who arrive off the Airport Express or off trains from other parts of Europe. This is a country that has absorbed many nationalities: 1 in 6 people living in Sweden today were born outside of the country.
Why might you legitimately ask is this relevant?  Here’s why: when the predominant business language is English (a 2nd language for almost everyone) the potential for miscommunication and misinterpretation is significant at a time when the country (and company) needs effective collaboration and communication to succeed.
Its a theme I will explore more later.

Over the last 20 years I’ve run a portfolio of activities. I’ve watched (and winced) as clients run to stand still: they want product to satisfy the C suite; to prove they are making a difference; and are worth the king’s ransom many are now paid. But has it made us more productive? Are we/they better off?
At the same time I talk to friends who run SME’s in hospitality and catering who are unable to expand due to a reluctance of entry level staff to “put a shift in” and work unsociable hours.
A few weeks back I met the CEO of a business with ambitious growth targets. I was there as an invited guest for the opening of an office.  He spoke glowingly to the assembled throng about how proud he was of their gender / diversity policy and how his team encourages openness and transparency.  Ours was a detailed and informed conversation following which I was asked to put some thoughts in writing.
This I was happy to do – I was not looking for business but saw a chance to help a business (which employs people I know) to grow. It took me a couple of hours to pull my thoughts together and the key issues I highlighted (with some reading around them) were:

I sent an email and heard nothing. I checked /called a week later. “Yes we received it and yes it was helpful.” You could argue that’s the way business is conducted today. You only hear if people want something and once they’ve got it they move on mentally.

“collaboration, it’s not just about me”

Take a look at the first two bullet points above.  Now consider how effectively your organisation shares ideas, knowledge, anecdotes.  Does it “work out loud?” As 80% of people on social media sites often lurk preferring to observe rather than participate it’s no wonder that collaboration initiatives often fail after an early spike of activity.
Recently I worked alongside a friend and former colleague on an assignment that sought to incorporate Knowledge Management practices into a rapid business transformation. At one of the working sessions it occurred to me that you cannot encourage “Working out Loud” or “Paying it Forward” if the culture is “Ready when Right!”
Is this an issue of culture and behaviours or something less sinister and related to the 3rd bullet point? Today I ‘talk’ to contacts, clients, friends (and family) via WhatsApp, LinkedIn Messages, Facebook Messenger, Skype, Zoom, Email, Text and sometimes on the phone or over a coffee. It’s inefficient but its not just about me.The Brasilian company I spoke to on Monday this week preferred Skype to Zoom and to prepare answers to questions in advance so that was the approach we adopted.
Collaboration is about communicating and working in the medium at the pace people are most comfortable in.  I’ve seen IT silver bullets quickly lose their lustre because the community doesn’t get it. Too often its a solution looking for a problem.  My message: find an approach that works and a way to capture the outputs (if they are likely to be of value).

Back to the language theme. For many years I used to say how proud I was to live in the UK as it had done a pretty good job of assimilating many cultures and is now a “tolerant multicultural society.” Imagine my horror when many of my friends and family asked me if I’d be happy to be told that they tolerated me!
Over dinner last Friday with a couple of Englishmen we examined this and concluded its about the sentiment which is often missed when you are dealing in a 2nd language. You take it at face value and then dissect what was said after.
I’ve long argued that the British thrive on ambiguity. An example being “Brexit means Brexit” which my European friends are still trying to understand.
I’ve seen a similar trait when family members speak to their staff in Portuguese.  They expect an East European to get the nuances of what they have said.

It’s hard enough in a social environment, in business it can be damaging and costly.

Tomorrow I will be closing an event targeted at the Scandinavian Legal Profession. It’s full, over 200 attending most of who have come I imagine to hear about the potential impact of AI on client business and hence their bottom line. I am going to be looking out for great examples of collaborative working.