Today I had the opportunity to help the business community where I live. Eastbourne Chamber of Commerce (the largest town chamber in the South East) invited me to give a talk on how to make an effective 60 second pitch / presentation at a networking event. 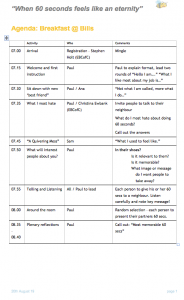 Unbeknown to the 32 delegates who’d assembled at Bill’s it was to be a journey beyond their comfort zones. I decided to make it an experiential session rather than the usual 10 minute ‘show and tell’ after breakfast.

Here’s the agenda I worked to:

We began by getting everyone to mingle and meet people they’d not previously talked to.  I encouraged them to talk to each other about what they most enjoyed about their job: people open up when they are positive!

By the time they sat down (each one with someone new) conversational juices were flowing.

At this point I asked them to consider how they might respond to this question “who are you and what do you do?” Many say, “I am …. the owner / CEO of …. and I employ … people and I’ve been in the town for over 20 years.”

Here we talked about what we hated about standing up and telling people about our businesses.  Words and phrases that emerged during the ‘call out’ were: Fear; too quiet; can’t hear; can’t speak; content; not being heard.  We rounded this off with an eloquent description from Samantha Akehurst (“Sam from Audi not Aldi”) of how she used to feel giving a 60 second address.

And so to the reason we were all there. I asked the Chamber members to put themselves “In the shoes” of the people who’d be listening to them. To focus on:

I shared two images and asked which one was the most powerful call to action: 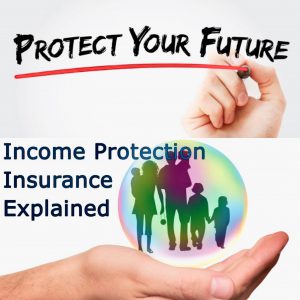 The majority chose the top image reasoning that it was relevant and in the language of the recipient whereas the bottom image was more about the product and its functionality.

Each person was then invited to give their 60 seconds to their new ‘best friend’. I asked the listener to pay special attention to the key message. I was to discover later how people started by describing who they were and then stopped, remembering my earlier comments.

The moment of truth

All this had been taking place while breakfast was being served / consumed and while I was searching for a suitable ‘talking stick‘ for each presenter to hold and then pass on. I ended up using a pepper grinder.

Over the next 35 minutes we saw a variety of approaches.  Those considered the most memorable had movement, a story, a strapline to conclude and a statistic or quote. Standouts displayed emphasis on emotion, passion and an injection of humour.

Here’s an example of a 60 second story “They’ve done a lot to the property” Ana of Bees Homes told her partner:

Recently we sold a property that had been empty and on the market for 8 months. After a weekend of home staging, taking quality photos and providing a narrative description of the house, a buyer was found within 10 days and completed in 2 months.

Interestingly, the story was relayed back almost word for word illustrating the importance of framing it in words the listener can absorb.  Ana’s ‘partner’ proudly held up a Bees Homes postcard while he was talking and closed with: “And they exceeded the sellers expectations.”

Other memorable examples of opening and closing lines:

Have you ever saved half a billion for your clients? (bespoke software)

If you get locked out call the cavalry (Locksmiths)

When you are stressed out think Calmer Self (well being)

I concluded by asking everyone whether they found the exercise of telling someone else’s story easier or harder.  The majority were in the easier camp. Stephen Holt in summing up noted that he had listened more to each story and witnessed some brilliant improvisations.

Hopefully this session will enthuse those who were there to spend a bit more time on the audience and the key message that they wish people to take away.