It’s been an effort getting back into the swing of things after a lovely Christmas spent in Cascais!  Maintaining a portfolio of activities as I have since 1999 requires a considerable amount of self motivation and a supportive network. So it was nice when ‘on cue’ a couple of my oldest friends / former colleagues (Martin, James and Victoria) got in touch to arrange catch up sessions and Tony Melendez of Saudi Aramco posted a picture (see below) of the 50 copies of The KM Cookbook his KM Team ordered for the management of the world’s largest oil company.

Over the past few months I’ve been full on helping my fellow partners at Bees Homes LLP run our annual ‘Pride of Eastbourne’ campaign. It culminated in the donation of 5 hampers to deserving people/causes prior to Christmas. Apart from managing the logistics of the campaign and mobilising mayoral resource, there is also the media and a “pause & reflect” to run so that, following good KM practice, lessons are transferred back into process for the next campaign. Taking the time out to reflect on any campaign, event or project is essential irrespective of size and number of stakeholders.  Our session which included debriefing with the Chamber of Commerce yielded a number of learning’s that would not have surfaced if we’d have not met face to face. It enabled us to also reflect on why the campaign was a success. These were deemed critical success factors:

And this is what the local paper (The Eastbourne Herald) printed: 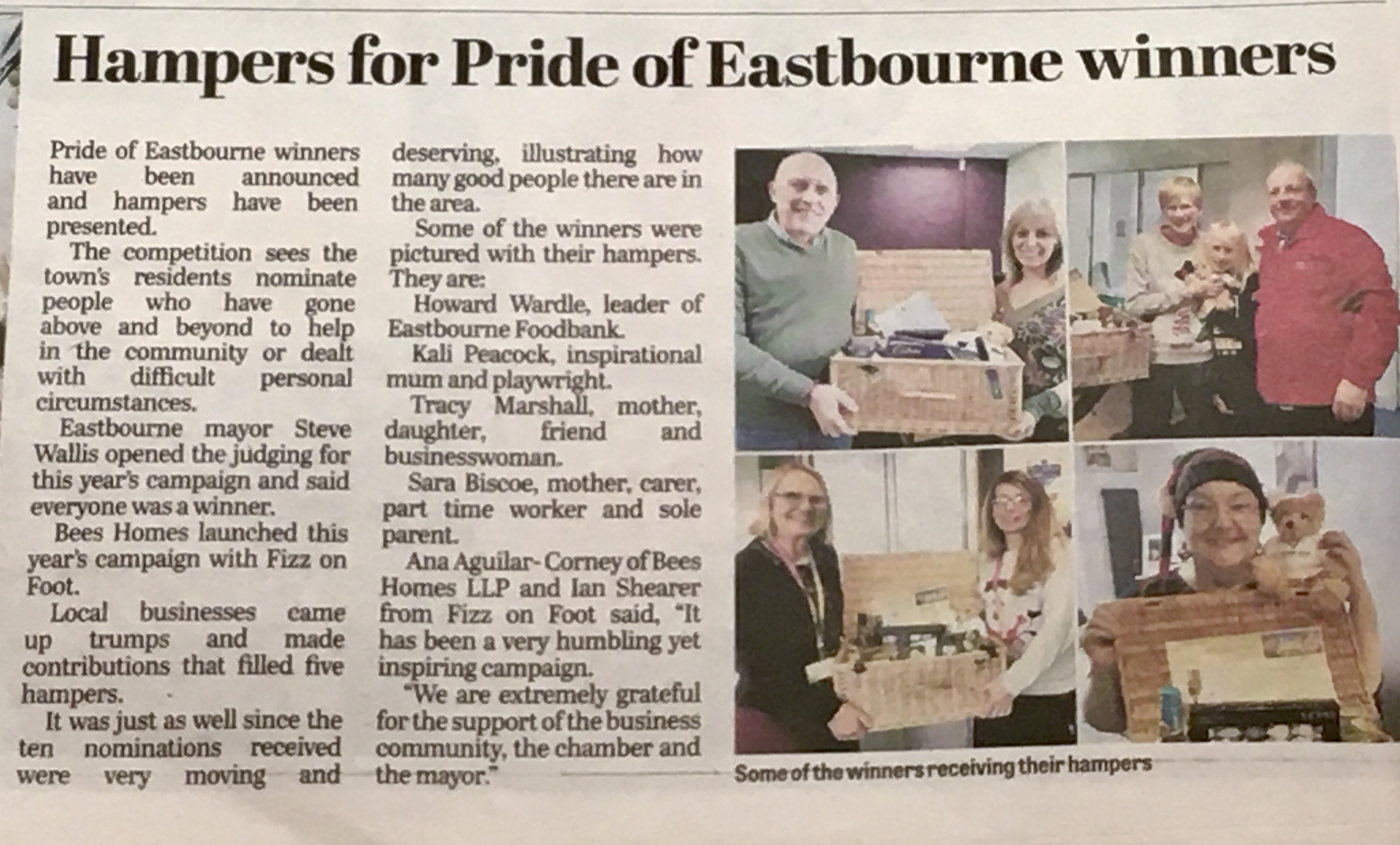 Some of you will be aware that on January 1st I was appointed President Elect of CILIP having been nominated by my good friend (former Chair and fellow BSI KM Standards Committee member) Karen Macfarlane. It took a few months to come to closure as for the first time I will be in a figurehead role devoid of executive authority.  Here’s why I said yes:

“In 2017 in ‘Navigating the Minefield: A Practical KM Companion’ I noted inter alia that to achieve corporate legitimacy, KM professionals would benefit from the introduction of a set of universal standards plus recognised practitioner led accreditation. I was pleased to have been a member of the BSI Committee that contributed to the development and publication of the ISO KM Standards 30401 and the CILIP project board overseeing the development of the Knowledge Management Chartership accreditation.

I am delighted to be appointed as President Elect CILIP as it allows me to remain close to and promote the ongoing development of a global practitioner led KM Chartership and Fellowship while expanding CILIP’s global reach.”

My wife Ana was at a charity event recently where she bid for and won a morning’s session with someone ‘Calmer Self‘ who helps:

…busy, successful people who are struggling to find moments of calm in their day to day lives…

Ana gifted it to me so two weeks ago I spent a ‘morning on the couch’ much of it in a state of meditation. I found it insightful and thought provoking. Among a number of observations handed to me were:

…when you offer advice and help to others it’s ok to truly let it go and to know that it is ok for them to do what they want with what you have given them… that it is perfectly acceptable to protect yourself from people that take too much from you energetically.

This resonated in respect of my previous writings on Knowledge Matchmaking. Perhaps this is the missing #10 on my list? 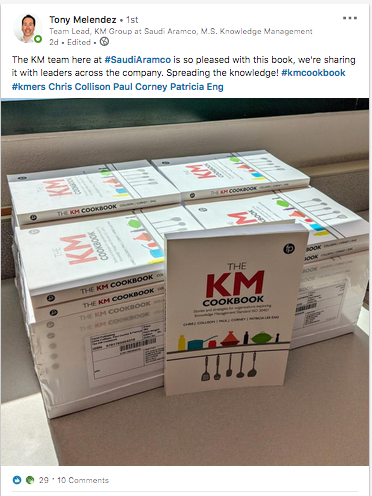 Nick Poole CEO, CILIP  (who own the publisher Facet) told me a few weeks before Christmas that the book is now well on the way to being their best seller (in 4 months) which is great news. And that was before this bulk order from Saudi Aramco.

“The authors’ combined experience permeates every page: it is in the book’s concept and structure, in the useful artefacts they developed (like the KM Chef’s Canvas, for instance), and in the way they expertly led and made sense of the interviews to then compose the 16 core chapters of the book – the KM approaches taken by different organisations.”

My coauthors and I have been delighted too at the wilingness of people to send photos of their copy in some amazing venues to contribute to the ‘Chelfies’ Gallery.  How many of the faces do you recognise? 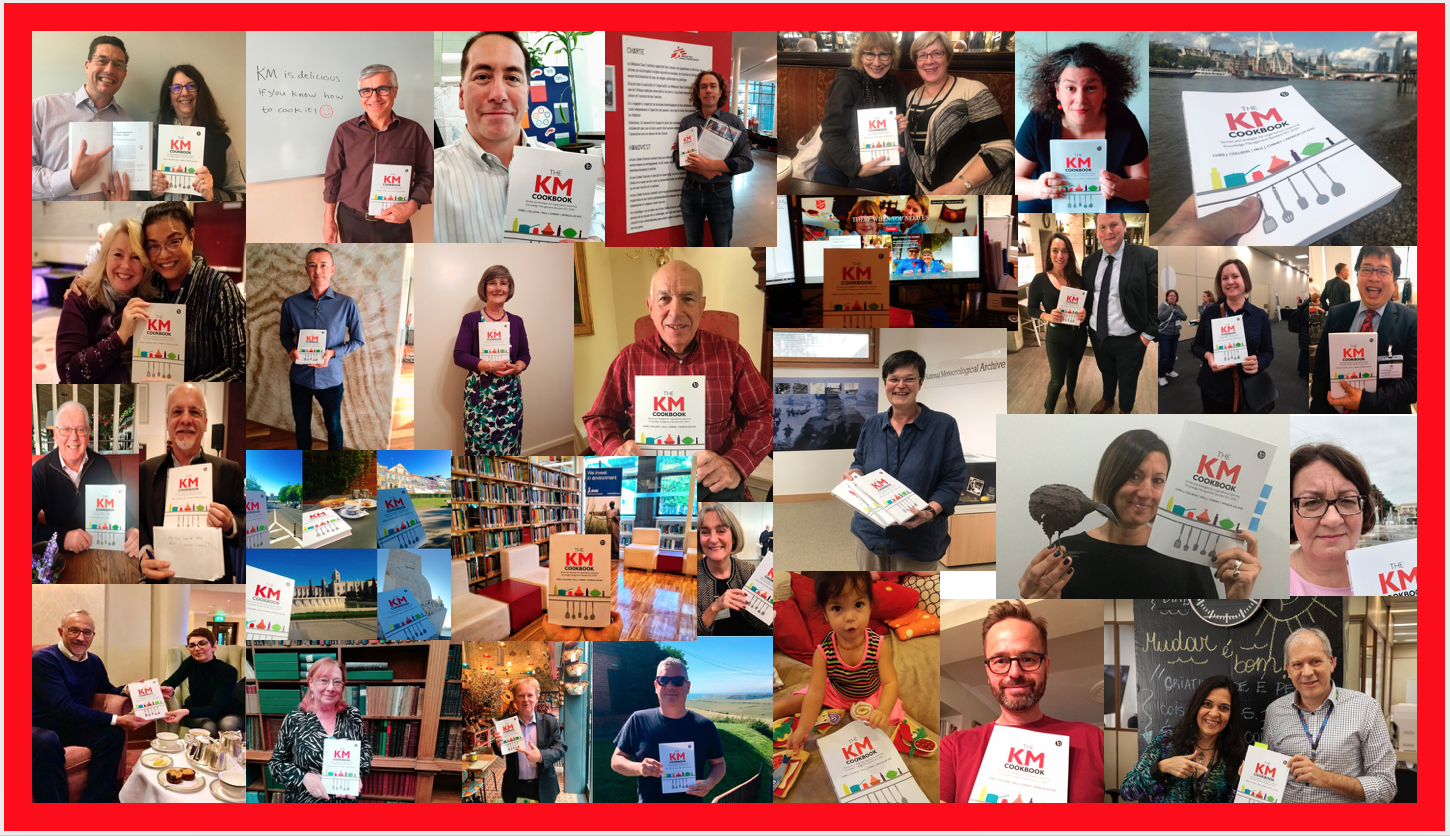 My aim over the coming year is to build on the success of the KM Cookbook and specifically draw on the KM Canvas to help organisations review existing programmes, build a new one or prepare for a future KM Audit against ISO 30401. 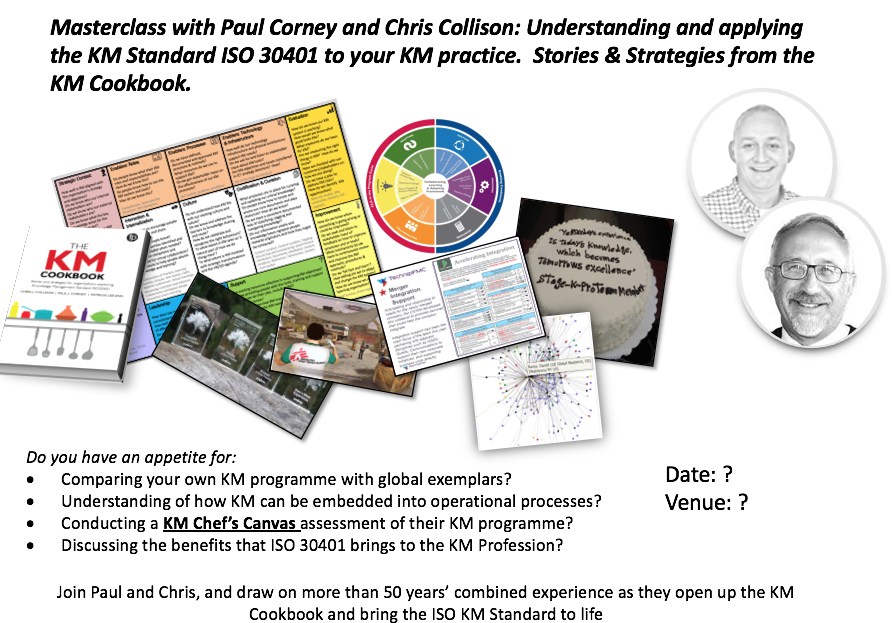 Chris Collison and I are booked for an event at the EU soon and I will be helping the good folks at NetIKX at the end of January to consider: Virtual working and learning: is it working for you?

In March I will be running sessions at the annual KM Summit, a K&IM Professional Development Day and AGM (a CILIP event) plus addressing a group of award winning entrepreneurs in Brighton on the importance of Knowledge Management to SME’s.

2020 is here. I’d already mentally devoted the bulk of it to helping Bees Homes and Coastway Financial expand and take a step back from KM Consulting other than associated with KM Cookbook. A recent email from an organisation to me (among others) with a Request for a Proposal (RFP) convinced me of the veracity of the decision. Dated 19th December the email asked for a written response to be on the desk of the Procurement Team by mail on Sunday 22nd December.  And it gave 17th December as the last date for submission of questions of clarification. Having spoken to like minded people I trust I immediately contacted Procurement to ask if they’d had no luck with an earlier mailing to prospective consultants or whether this was a mistake.  I received no formal acknowledgement but I and others got an email within 4 hours saying:

How can Knowledge Management possibly thrive in an environment where the conduct of an audit of work done is a ‘tick box’ exercise aimed at justifying spend?  Life’s too short!!!!